Russian scientists have developed radio-frequency weapons that make the atomic bomb obsolete.  Their latest device can disable aircraft, tanks and other weapons and kill battalions of troops.

These killer weapons do not damage or contaminate buildings or factories which are left intact for an advancing army to simply ‘walk in.’

In Moscow’s Lubyanka Oleg Kalugin of the Federal Security Police is given the task of producing a new generation of aircraft to carry and deliver Russia’s new weapon.

Kalugin has an unexpected visit from a Chinese businessman who had been poaching Rhinos in South Africa for their horn.  He told Kalugin that his poacher team had been compromised by a Professor and two schoolchildren who flew a unique aircraft that worked on anti-magnetism.  He wondered whether Kalugin would join forces with him to steal this aircraft.

Meanwhile, the Mine Captain of a Johannesburg gold mine stole a large number of explosives when he retired.  He decided to use these explosives to stun fish in rivers and the sea that could then be netted and sold after they rose to the surface.  These fish-poachers were also caught and arrested by the Professor and his grandchildren, using his flying Bubble Car.

How Kalugin’s attempt to steal Professor Nyembezi’s aircraft and his Robot, in training for a mission to Mars, makes for an exciting surprise ending in Moscow and at the Rand Easter Show before a large crowd of onlookers. 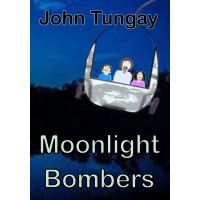